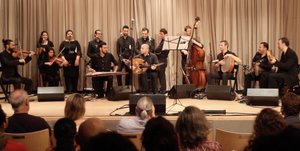 Takht al-Nagham is a New York-based Arab ensemble featuring the sound of a traditional takht (Arab chamber music group). Nagham is Arabic for melody or tune, and is also used as a synonym for the Arab Maqam system. Following the vision of its founder Samer Ali, the group was founded in 2017 and is committed to performing the classical Syrian repertoire with traditional acoustic instruments. In order to familiarize audiences in the U.S. with the original structure of the musical traditions, the takht presents its sets (called wasla in Arabic) in the same manner that they were originally performed. 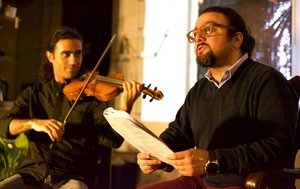 This project presents a group of Syrian poets and musicians collaborating with visual artists to present poetry as a multi-sensory experience; readings and art with musical accompaniment. The multifaceted nature of this experience invites all three creative forms to transcend imposed creative boundaries and offer new experiential nuances.

Ta'sheeq was launched in Boston in May 2016. In the debut event, poets Hussam Jefee and Alma Nizam, accompanied by violinist Samer Ali, and works by visual artist Tammam Azzam, were all merged to create a new sensory experience in which poetry can be presented and received. 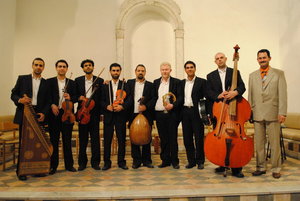 Awj Ensemble was founded by Samer Ali & Wassim Mukdad in Damascus, Syria 2007. Awj was an eight piece ensemble that focused on the traditional Syrian and Egyptian instrumental music. Awj is Arabic for peak, summit, or prosperity, and also used as a name of the "B half-flat" note (the 7th note in the Rast Maqam) in the Arabic Maqam system. The group was Damascus-based and performed regularly at the Danish Institute (Beit Al-Aqqad) in the old city, but also performed all over the Syrian geography: Aleppo, Latakia, and Tartus, etc.

After the uprising in our beloved Syria, Awj musical activities had to stop.